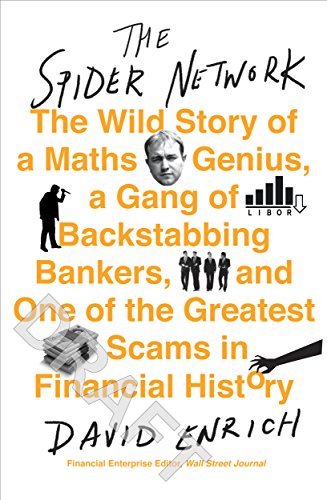 Links: Amazon UK and Amazon US and Waterstones.

The Spider Network: The Wild Story of a Maths Genius, a Gang of Backstabbing Bankers, and One of the Greatest Scams in Financial History

In 2006, an oddball group of bankers, traders and brokers from some of the largest financial institutions made a startling realization: Libor—the London interbank offered rate, which determines the interest rates on trillions in loans worldwide—was set daily by a small group of easily manipulated administrators, and that they could reap huge profits by nudging it fractions of a percent to suit their trading portfolios. Tom Hayes, a brilliant but troubled mathematician, became the lynchpin of a wild alliance that included a prickly French trader nicknamed “Gollum”; the broker “Abbo,” who liked to publicly strip naked when drinking; a nervous Kazakh chicken farmer known as “Derka Derka”; a broker known as “Village” (short for “Village Idiot”) who racked up huge expense account bills; an executive called “Clumpy” because of his patchwork hair loss; and a broker uncreatively nicknamed “Big Nose” who had once been a semi-professional boxer. This group generated incredible riches —until it all unraveled in spectacularly vicious, backstabbing fashion.

With exclusive access to key characters and evidence, The Spider Network is not only a rollicking account of the scam, but also a provocative examination of a financial system that was crooked throughout.

An interesting look at the Libor scandal from an American investigative journalist lens.

The book charts the story of how the Libor rate – the London interbank lending rate that many variable-rate products such as credit cards depend on – was manipulated, thus affecting many unsuspecting individuals worldwide.

This is a book for those that don’t have much understanding of the financial workings that underpin the financial sector, with simple-to-understand explanations and examples to illustrate the issues. For those that do, there are some fascinating snippets of the history of financial instruments and the characters behind them, although you’d have to (like I had to) grin and bear the at times over-zealous banker-bashing that the author occasionally gets drawn into. Overall, an interesting mix of investigative journalism and history that would have been brilliant had it not viewed every person and action from a bitterly critical perspective.

*Thank you to the publisher for my free review copy via NetGalley.