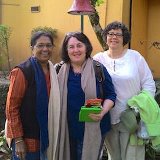 I am excited to welcome Barb Taub, author of the hilarious Do Not Wash Hands in Plates, on the blog today.

Welcome, Barb. Tell us a little bit about you…

In halcyon days BC (before children), I wrote a humor column for several Midwest newspapers. With the arrival of Child #4, I veered toward the dark side and an HR career. Following a daring daytime escape to England, I’ve lived in a medieval castle and a Hobbit House with my prince-of-a-guy and the World’s Most Spoiled AussieDog. Now all my days are Saturdays. I spend them cavorting around the world, plus consulting with my daughter on Marvel heroes, Null City, and translating from British to American.

Your inspiration for Do Not Wash Hands in Plates?

I’ve always had a theory that if you turn down a chance to do something you’ve always said you wanted to try, it’s a sign you’re getting old. (Or maybe just smarter. I’m still not sure! Certainly a different philosophy could have avoided any number of contacts with medical and possibly a few law enforcement personnel…) But when we split up after University, Janine and Jaya and I always said we wanted to visit her in India. Last year we realized that our kids were grown, and our jobs flexible enough to finally make it possible. None of us knew what it would be like to get together again after literally decades had passed since our last trip. But it turns out the answer to that question is: “Amazing!” (Apparently, a lifetime of responsible jobs, marriages, and kids can evaporate in an instant when someone says, “Hey, remember the time we couldn’t find our exit tickets and had to jump the turnstiles at 57th Street?”)

I understand this is your first travelogue? What genre do you normally write in?

My other books are part of the Null City series, which is urban fantasy loosely set in Seattle, WA (USA). But I love to travel, and my posts about trips have been some of the most popular on my blog. For example this one about our fabulously disaster-prone trip to the Isle of Mull in Scotland was one of my most popular posts last year. Trips on my blog include making macarons in Paris, exploring Moscow, having the car break down in (well, actually, just about everywhere we drove it, including England, Scotland, France, and Spain…) But whatever the prompt or the genre, humor forms a big part of my writing style. One humor blog, Top Ten Reasons For Women Not to Get Married has had over twenty-five thousand hits, while another one, Serial Kid-Producer Reveals Top Ten Reasons Not to Have Kids, received the Freshly Pressed award from WordPress.

Where and when do you write?

When my kids were little, I was up and down all night with them, and I used to fantasize about an uninterrupted night’s sleep. So it’s kind of ironic that I turn out to be absolute rubbish at sleeping. Or maybe it’s just that I find something magic about being the only one awake in the middle of the night. Certainly, it’s when I do most of my writing. And as for where? When I’m in the Hobbit House at home in Glasgow, I work at my little desk in a corner of our sitting room. On the road? I’ve written many a blog post and book chapter with my trusty Mac on my knees. But when I’m in New York, it’s the lobby of the Ace that calls me every time.

Total pantser. Don’t get me wrong—I usually start with terrific organization, character charts, outlines, the works. I occasionally look back at them and think, “That would have made a great story. Too bad nobody will ever write it…”
6. Do you do any research (other than travelling around!)? If so, any sites or sources you care to share?

I wonder…a LOT… what certain government agencies would make of my Google search history. Just looking at the last 48 hours shows queries ranging from “How much blood could you lose and still survive” to “best nonlethal places to get shot with an arrow”. And that doesn’t even include “smallest, most accurate handgun. Purple.”

Do you read inside your genre or out when writing?

I used to be afraid to read in my genre in case I might accidentally “borrow” something from other books. But I realized that every writer takes a different approach to scenarios, so it’s unlikely that I’d duplicate others’ work. Plus I write in that genre because it’s what I like to read.

I’m not sure if they’re my heroes, but there are some go-to old friends that never fail to welcome me back—Good Omens by Neil Gaiman and Terry Pratchett, Robin McKinley’s Hero and the Crown books,  Dorothy L. Sayer’s Harriet Vane/Lord Peter Wimsey books, and the list goes on.

Universal Amazon links to Barb’s books can be found below:

Do Not Wash Hands In Plates: http://authl.it/4kk