I am excited to welcome author Liz Mistry on the blog today as part of the blog tour for Unquiet Souls. Over to you Liz… 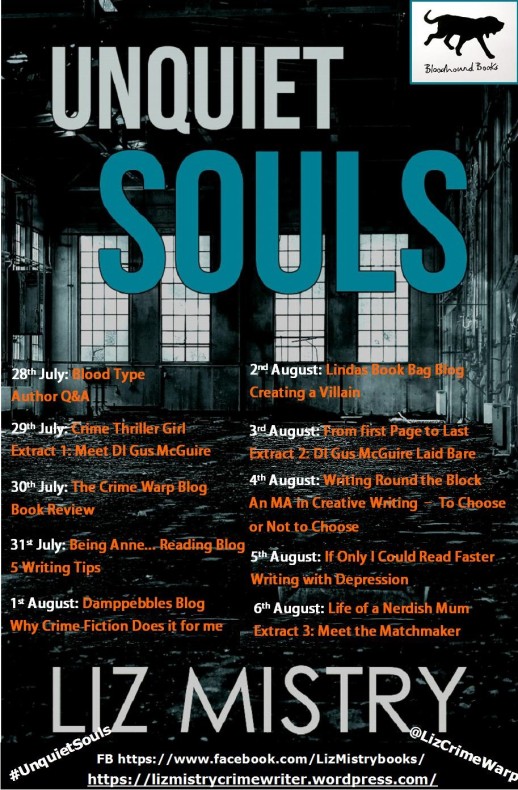 An MA in Creative writing… to choose or not to choose?

Recently there’s been a lot of discussion about the validity of doing an MA in Creative Writing.  Some suggest it’s a waste of time whilst others rave about it.  For me personally it was a lifesaver.  I don’t think I would have been where I am now with a two book deal from Bloodhound books and my first crime fiction novel Unquiet Souls newly released.  However, that’s not so much because I have an MA in creative writing per se.  It’s more because the MA provided me with what I needed at the time to complete my book and get it out there.

For me, The MA (Creative Writing) at Leeds Trinity University gave me focus, confidence and supplied me with a creative writing community I grew to trust and respect.  I suffer from depression and had been trying to complete Unquiet Souls for years.  The MA was my last ditch attempt to do it … and it paid off for me.

That said, I don’t think you need and MA in Creative writing to get published- many of the best writers barely have an A-Level to their name and let’s face it – that’s fine.  Writing isn’t necessarily academic, nor is it necessarily non-academic.  The ability to tell a story is often inherent and if there’s a great story in you, hopefully it’ll come out on the page and a publisher will snatch it up.

The MA is all about what you, as a writer, want form the course.  I wanted to get published and had a first draft of Unquiet Souls under my belt before I started.  Many of my fellow students are working on their first drafts at the moment and some aren’t entirely sure what they want to write.

So, basically if you can afford it and you think you as a writer will benefit from a part academic part creative course with a routine then go for it.  If you can get your support elsewhere and you have a great writing community, then the MA may not necessarily for you.  But, a word of warning, completing the MA will not guarantee you a book deal, although it may help you raise tyour writing to a level where a book deal is more likely.

What is the link between the abduction of a little girl and a dead prostitute?

When the body of a prostitute is discovered DI Gus McGuire is handed the case. But what first appears to be a simple murder soon turns into an international manhunt for the members of a twisted child trafficking ring.

McGuire who is suffering with problems of his own, he must pick his way through the web of deceit and uncover the truth in time before the body count rises.

Can McGuire identify The Matchmaker before it’s too late? And can he trust those he is working with?

Unquiet Souls is the first book in a dark and compelling new police series.

Liz Mistry was born in West Calder, Scotland and educated at Stirling University before moving to Bradford for her PGCE, where she settled with her husband, Nilesh, her three children, Ravi, Kasi and Jimi and her two cats. Liz taught in Inner city Bradford schools for many years. Suffering from depression for many years, Liz used her writing to help her through the darkest times. She is currently part-way through an MA in Creative Writing from Leeds Trinity University, which she acknowledges as being instrumental in developing her confidence as a writer. Liz is co-founder and main contributor to The Crime Warp Blog.

Liz is available to write articles on many subjects including; ‘Writing with depression’, ‘Why choose an MA in Creative Writing’, ‘Why crime fiction does it for me?’, ‘Creating a villain’, ‘The cross- genre nature of crime fiction’ … and more.