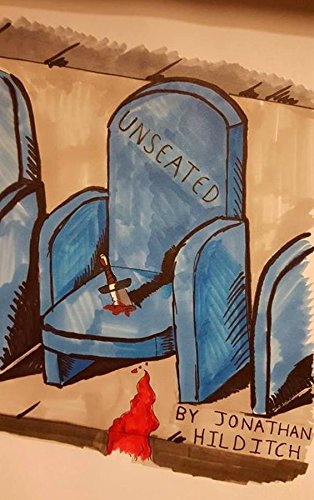 I am very pleased to welcome author Jonathan Hilditch on the blog today.

Welcome, Jonathan. Tell us a little bit about you…

I am a teacher who lives in Solihull, England. I have a wife called Kate and two children called Holly and Joey. My book is titled Unseated and is based on my two hobbies of football and music. The idea sprouted after watching Law Abiding Citizen at the cinema. I liked Gerard Butler`s character, who was a man who took the law into his own hands after his wife and child were killed and the murderers received only a minimal prison sentence. The idea of a wronged vigilante appealed to me but my character Marcus Fellows has a bit more evil in him because he feels he is wronged because after taking drugs and destroying his career, no football club will touch him. Therefore, he decides to kill a fan from every club and leaves a cryptic clue for the each ground that policeman Eddie Firth manages to find and decode. When I first got this idea, it gave me a buzz that no other book idea had ever given me. I started writing in the summer holidays and redrafted the summer after. The completed book is now the fourth draft. When I read it through to check after copy editing, I felt myself getting tense whilst reading. I said to my wife that this was really silly as, “I wrote it and already know what will happen.”

I have the sequel planned in my head but unfortunately my thirty-two children (class and my kids) take up too much of my time to write it. To write, I need a good block of time that means I can write continuously over a period of time. If I start then stop, I find I lose flow so I’ll have to move my wife and kids out for a few months to get a first draft down. (Don’t tell them I said that).The storyline has evolved already for the sequel and hopefully one day it will become a reality.

Your inspiration for Unseated?

The film Law Abiding Citizen was the catalyst for Unseated but the inspiration came from football and music. The book has a series of cryptic clues for English football grounds. For example the clue gangsters wife up tree will lead you to Wolverhampton Wanderers ground Molineux (Moll in Yew). I remember being sent similar clues when I was at University and spending a lecture with a friend working them all out at the back of the lecture theatre. Once I’d made a clue for each ground, I then decided I wanted to bring in my other passion which is music. I grouped all my clues by number of syllables and then wrote the music to go with it. Luckily in the book the main character DI Eddie Firth makes fun of the song so if anyone ever says it sounds terrible, I can say that it is meant to be bad for the purposes of the storyline (that’s my excuse anyway). The music holds a strong purpose for the storyline, as it helps to locate the individual seat for the fan that Marcus Fellows wants to kill. When my brother in law read the book he asked why Marcus would want the killings to be so ordered. I replied that this was Marcus’ game now and because he’d killed so many fans without detection, he wanted to make to add a bit more fun and have the thrill of a detective on the case to make him up his game and add more excitement. There are however big consequences for Marcus doing this, and I don’t mean being caught.

The music and football are big inspirations but also other authors that have inspired me such as Mo Hayder, Mark Sennen and Mark Billingham. Their detectives have inspired me and helped to shape my own detctive Eddie Firth.

What are you currently writing?

I would love to be able to say I was in the process of writing the sequel for Unseated but unfortunately, as already stated, time is not on my side with two kids and a demanding job. Therefore, all my writing is in the planning stage and I write down ideas for my books in a notebook in the hope that one day I will come back to it. My next project will probably be in the summer holidays when I would like to try and write a children’s book. I had a dream recently about someone who found a lazer in his garden and he fired it. When he did so, the solar system popped and disappeared off. Suddenly, a moon buggy like vehicle was chasing him. This idea then developed into an idea that people on Earth are in a sort of compter game and every person in the world has a gamer that controls them. This gives us the explanation for why people do bad things, as there is a higher force controlling all human activity. I have had other ideas that I would like to try and use to get reluctant readers around ten years old to get into reading.

Where and when do you write?

Most of my writing is done in school holidays and I have a little notebook that I write on (computer not paper). All my Unseated drafts are backed up on a number of devices because I know that one day it will give up on me. For now though it works for me.

I previosly wrote a book around the time I first started seeing my wife (girlfriend as she was at the time – we didn’t get married as soon as we met). Kate lived in Solihull and I lived on the Wirral so we used to take it in turns to visit at weekends. On the train I would started writing a book based on a boy who lived at university. The story followst he life of an undergraduate and all the troubles that he gets into are stories I heard or experienced when I was at university. I still have this manuscript somewhere but it was all written by hand so for the moment it will remain unfinished. When I got the ideas for Unseated, I just got a better feeling for the book and the plot was a lot more exciting so I decided to write that instead.

I would say that I am a planner. I have folders with chapter plans, which changed as I was writing. The chapters for Unseated were all planned and there is a lot of crossing out and adding in on them as the storyline evolved. Personally I need to know which direction I am going in with a book and there have been plenty of times where I have come home and gone straight upstairs to add a new idea to my chapter notes.

The most important part of my planning comes in the form of the characters. The fear I had was saying in chapter 3 Eddie Firth, blue eyes twinkling; then in chapter 7 saying Eddie Firth’s dark brown eyes folllowed him around the room. To get around this I took to cutting pictures out of the paper. Therefore, if I am describing a character they link to a picture so fingers crossed all the descriptions in the book should be continuous and there won’t be a character who has coloured their hair without me telling the reader.

Do you do any research?

The main research I did for Unseated was using Google Earth. Whilst my book is fiction, a lot of the plot involves places that are real i.e. football grounds. When there were chases from some of the grounds, I used Google Earth to ensure accuracy so supporters reading the book can relate to their own ground. I use street names at times that are on the approach to certain grounds. A lot of them I have never visited in person but I have had a cyber walk around to get my bearings for Marcus Fellows so he can go about his murderous business.

Do you read inside your genre or out when writing?

When I write I generally read crime fiction. It’s important to read around a genre as I feel that it gives ideas for your own style of writing. As I’ve already said I read Mark Sennen, Mark Billingham and Mo Hayder as my favourite authors but also have begun to enjoy Raymond Chandler and like his character Phillip Marlowe.

Outside of crime fiction, I have read a few Bill Bryson books and I love his humour. In his book Notes from a Big Country he talks about bad motels and shower curtains. He goes on to state that while Janet Leigh was being hacked up in Psycho, he thought she was lucky to have a shower curtain. I also like to read sporting autobiographies and biographies. Chris Eubank, Carl Froch, Neville Southall and Brian Harris are some of the sporting characters I have enjoyed reading about most.

Your author heroes?
I would say that Mo Hayder is my author hero because of one moment in one of her books that taught me a lesson myself. That lesson was that you don’t always have to please your reader. Throughout her Jack Caffery books, we find out that he had a brother who was taken by convicted paedophile Ivan Prenderecki when they were younger. In the book The Treatment Jack Caffery tracks down information on his brother and eventually gets to the caravan door where he has been tied up. I remember reading that and thinking, go on, open the door. That would have been the easy option but in the end Jack Caffery walks away. There were a number of internet debates about this outcome and a real mix of opinion. Personally, I thought it was a very clever piece of writing, as every time in subsequent books Caffery mentioned his brother, this was now information you knew which the main character didn’t.

Jack Caffery, Tom Thorne (Mark Billingham) and Charlotte Savage (Mark Sennen) have all shown me what a good detective needs. Good policing skills are essential but a willingness to bend the rules is essential. This is something I get my detective, Eddie Firth, to do in my book.

Thank you, Jonathan, for joining us today.

Unseated is available on Amazon UK and Amazon US.