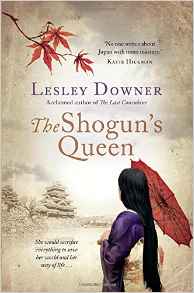 I am excited to welcome Lesley Downer, author of The Shogun’s Queen, on the blog today. My review of the book is coming soon but, today, I will give the reins over to Lesley…

Hello, Chris. First, thank you for inviting me to post on your blog today. I much appreciate it!

More than ten years ago I spent six months living among geisha in Kyoto, Tokyo and other Japanese cities and among the geisha communities in hot spring resorts like Atami – a sort of Blackpool of Japan. Since then we’ve all grown older and some of us have prospered amazingly.

I visited Tokyo recently in the middle of writing my latest novel, The Shogun’s Queen. I’d been giving lectures on a ship which was travelling around the coast of Japan. We docked in Tokyo and I took the opportunity to do a little research and look up some old friends.

When I first met Kiyoha, she was an ethereally beautiful woman with long flowing hair. It had been a real struggle to break through to the geisha in Kyoto. The old women who held the keys to the community were tough old birds. It had taken months of wooing before they would speak to me, let alone introduce me to any of the young trainee geisha – the maiko.

Then somehow I got hold of Kiyoha’s phone number and phoned her. ‘Of course,’ she said, and set up a date to meet. I was entirely amazed.

Sitting with her in the hotel where we met it was hard to believe she was a geisha. She was just back from Paris. She had friends there and often went to shop for clothes. She was dressed in filmy French couture which she had bought on her latest trip.

Then she began to tell me about the geisha life. Geisha are custodians of classical Japanese culture. Some young women become geisha because they want to train as dancers; the training is every bit as rigorous as joining the Bolshoi. In Kiyoha’s case she loved classical singing. For her it was a bit like becoming an opera singer.

Kiyoha told me that the one thing she missed was a lover. Her job was to entertain men, to chat, to flirt – and then to send them home to their wives. That’s the poignancy of the geisha life. And it’s that bittersweet poignancy that makes men love the company of geisha, that underlying sadness.

In one of my previous books I told the story of Sadayakko who was Puccini‘s model for Madame Butterfly. She lived with her lover Momosuke for many years. Then when he was old and ill she sent him home to his wife to die. Geisha are down to earth working class girls. In the old days many geisha helped out around their lover’s house. His children called them ‘Auntie.’ When a man died his geisha usually arranged the funeral because the upper class wife was too highly strung and unworldly to know what to do.

In old Japan everyone knew their duty, everyone had a role. Men expected there to be different sorts of women in their lives – a wife at home, maybe a concubine if the man was wealthy enough, or a geisha who was a long time lover, and he might also go and buy sex if he felt like it. There were lots of choices for men. Women conversely kept to their roles and couldn’t leave them. And so it was for the women of the Women’s Palace.

My latest novel, The Shogun’s Queen, is set in this world. One of the dichotomies in Japan is between honne and tatemae – your true feelings and how you have to behave, your desires and wants and what society demands of you. Many kabuki dramas are about people torn between what they want and what they have to do. In the modern west we no longer care about duty but in old Japan duty was all important.

As we were talking Kiyoha said, ‘Would you like to see me at work?’ I hadn’t dared ask. There and then she took her mobile out of her expensive handbag and called one of her customers. He too loved classical singing and over the years they had become friends. He immediately agreed to host a party for me. It would, Kiyoha said with a twinkle, cost him about £5000.

A few days later I found myself outside an intimidating grand Japanese building with wooden walls flecked with gold, rice straw tatami mats and low lighting. The prime minister was entertaining in another room there and there were limos and bodyguards at the entrance.

Kiyoha introduced me to our host, a middle-aged businessman. She was in a kimono with her hair up and wearing pale make up. There was food and sake and five geisha to entertain us. Two of the geisha were dancers. First they danced very beautifully while other geisha played music. Then Kiyoha sang and the customer sang too.

Ten years later back in Tokyo I called Kiyoha. She was singing at the National Theatre, the equivalent of the Royal Opera House, and asked me to come and watch her perform. She’d risen in the world, she was a star. She now had her own bar where she entertained, she told me. But, she added wistfully, she still had no lover.

The Shogun’s Queen is available here.

1 thought on “#Guestpost by Lesley Downer, author of the Shogun’s Queen”