I am delighted to welcome Rob Sinclair on the blog today as part of the 12 Days of Clink Street blog hop.

Rob’s first novel, Dance with the Enemy, was published in June 2014 and is the first in the bestselling Enemy Series following embattled intelligence agent Carl Logan. Rise of the Enemy, the second book in the series, was released in April 2015, with the third book, Hunt for the Enemy, being released in February 2016.

The Enemy series has received widespread critical acclaim with many reviewers and readers having likened Rob’s work to authors at the very top of the genre, including Lee Child and Vince Flynn.

Rob worked for nearly 13 years for a global accounting firm after graduating from The University of Nottingham in 2002, specialising in forensic fraud investigations at both national and international levels. He now writes full time.

Originally from the North East of England, Rob has lived and worked in a number of fast paced cities, including New York, and is now settled in the West Midlands with his wife and young sons. 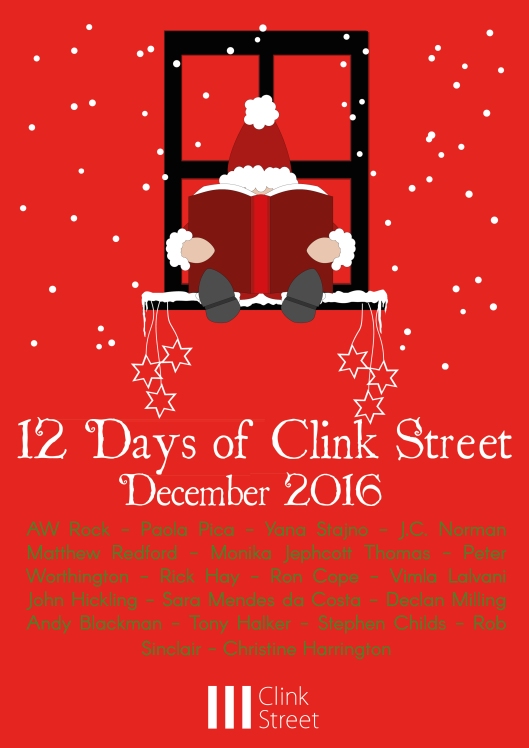 Welcome, Rob. Tell us a little bit about you…

I’m Rob Sinclair, author of the bestselling Enemy series of novels which have sold 200,000 copies around the world! Carl Logan, my main character, is an action hero in the mould of James Bourne and Jack Reacher, albeit one with a unique sense of vulnerability about him that sets him apart from many of his literary peers.

Outside of writing I’m married with two young sons (aged 5 and 3), who are equally wonderful and horrible depending on what day you catch me on!!

Is Christmas featured in any of your novels?

It’s not! Although Rise of the Enemy and Hunt for the Enemy are both set in winter and follow Logan through bitter cold Siberia, and on into Kazakhstan, so there’s plenty of snow and ice and festive scenery, and I’d say they are probably ideal books to read around Christmas time, snuggled near a fire!

I honestly don’t think I’ve ever read an adult book that had christmas in it – at least not that I remember. I’d probably say that my favourite from when I was a child was the Snowman, which of course spurned the famous TV adaption that still sends a tingle down my spine even today.

If I’m allowed to stray into film I’d say my favourite christmas film is, our course, Die Hard 😉

Where and when do you write over the Christmas holidays?

I’m not planning to!! As a stay at home Dad I tend not to do much writing during school holidays anyway, and over Christmas there’s always so much crammed into two short weeks, with christmas and new year and birthdays (we have six birthdays in December in our family) and family visits etc etc, that there just isn’t the time! I’ll come back in January refreshed and raring to go … (or maybe I’ll have a week off to recover first!).

I’m both! When it comes to drafting a new story I’m absolutely a pantser. Rather than planning out a full plot I tend to have just a couple of big ideas and I sit down and begin typing and see where it all goes.

On the other hand, I’m a very organised person, so I set myself goals and targets all the time (daily word counts, hard deadlines for finishing drafts and edits and publication), so even though on day 1 I might not know where the story is going exactly, I’ve already got in my head when I want every step of the writing process completed by.

Do you do any research?

For my Enemy series books I didn’t do much. Really not much was needed as I used a lot of locations that were familiar to me, and the genre of underground intelligence agencies carrying out black ops is one that is so ambiguous (do they really exist at all?!) that there’s not really much to research. The research I needed tended to be on points of fact – e.g. something about a particular location, a weapon, a fighting technique etc.

That said, the book I’m currently drafting is a step away from the Enemy series and a first move for me into something more like police procedural crime fiction, for which I’ve spent many hours researching real life serial killers (which is very unsettling!) and for which I’m also hoping to spend some time chatting with real life detectives to understand more of their processes and also to hear their experiences.

What’s your favourite read that you have ever received as a Christmas present?

The Guinness Book of Records!! For years as a kid this was always on my list. I’ve always been fascinated with facts and loved reading and absorbing all of the various world records from the obscure to the revolting to the incredible. I’m looking forward to buying these for my boys soon too!

I mentioned before about Jason Bourne and Jack Reacher and I’d go with Robert Ludlum and Lee Child as two of my heroes simply because time and time again I’ve loved their work. Also into the mix I’d put Ian Fleming, and a big mention has to go Terry Pratchett, whose Discworld books were by far and away my favourite fiction books as a kid and a teenager.

Thank you, Rob, for joining us today.

Dance with the Enemy – The Blurb

Carl Logan was the perfect agent. A loner. No real friends or family. Trained to deal with any situation with cold efficiency, devoid of emotion. But Logan isn’t the man he used to be, or the asset he once was. Five months ago his life changed forever when he was captured, tortured and left for dead by Youssef Selim, one of the world’s most violent terrorists. When Selim mysteriously reappears in Paris, linked to the kidnapping of America’s Attorney General, Logan smells his chance for revenge. Pursuing his man relentlessly, oblivious to the growing trail of destruction that he leaves in his wake, Logan delves increasingly deep into the web of lies and deceit surrounding the kidnapping. Finally, he comes to learn just what it means to Dance with the Enemy.

Dance with the Enemy – My Review

An action-packed, page-turner of a thriller, this book about mixing business with pleasure and everything in between was a great read.

Carl Logan, an emotionally scarred agent sent to recover a kidnapped American Attorney General, gets more than he bargained when it becomes obvious that his one-time torturer, Selim, is linked to the case. Now out for revenge, Logan is drawn further into a web of destruction, with murderers, an attractive FBI agent and political enemies all adding their own strings to the whole.

Logan is one of those characters you want to save from the inevitable self-destruction. The story doesn’t let up (in a good way). And I’m now off to download the next one in this series…

You can get it from Amazon UK and Amazon US.

Rise of the Enemy – The Blurb

Everyone has a breaking point. Carl Logan might just have found his.

The Joint Intelligence Agency sends agent Carl Logan on a routine mission to Russia. It should have been simple. But when Logan’s cover is blown, he’s transported into a world of hell he thought he would never see again. Something is different this time, though, and before long doubts begin to surface in Logan’s mind as to why the assignment went so wrong. Logan has never been short of enemies. And sometimes the enemy is closer to home than you think.

Could his own people really have set him up?

Rise of the Enemy – My Review

Carl Logan is back, and broken as ever. When he’s sent to Russia by the JIA on a routine mission that goes terribly wrong, the doubts set in… And so does the action.

The suspense was well-crafted and beautifully cranked up, the pace fast, and the plot exactly what one wants from this type of book. One more to go… but you’ll have to wait another day for that review…

You can buy it from Amazon UK and Amazon US.