I am delighted to be part of the blog tour for Reality Rehab by Lisa Mary London. 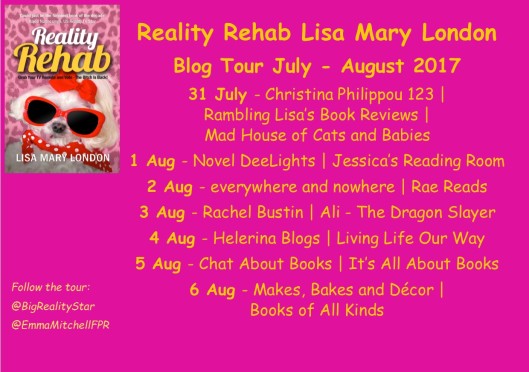 Faded TV star Gloria Grayson has hit rock bottom. Sacked from her starring role in a top soap, divorced from hell-raising actor ‘Mad’ Tommy Mack, and obese from binge eating, her days as Britain’s sexiest blonde are well and truly over.

Gloria has gained 70 lbs when a paparazzi snaps unflattering photos, and a cruel tabloid article relaunches her career. Instantly, she and her fat, feisty dog Baby-Girl are booked for TV’s Reality Rehab. Gloria is locked up with an American psychotherapist, a rabble of D-list celebrities and umpteen cameras, then put on a starvation diet. But worse is to come, with the shock arrival of her alcoholic ex-husband.

Tears and tantrums ensue, as the divorced couple’s joint therapy sessions take over the show and ratings soar. The other celebrities are infuriated to be sidelined and Reality Rehab fast becomes The Tommy and Glo Show. But Gloria and Tommy are hiding explosive secrets from each other and 10 million viewers – Reality is stranger than fiction!

Reality Rehab is the debut novel of Lisa Mary London, a journalist and former reality TV producer. A cast of hilarious characters, cliffhangers galore and an authentic voice that could only come from a TV insider, Reality Rehab is this year’s must-read!

Disclaimer: The only ‘Reality TV’ that I watch regularly is documentaries and sport. Did this make any difference to my enjoyment of this novel? Not one jot. I spent most of the time with my arm dug into my side trying to get rid of the stitch I got from laughing so hard. I also found myself running to the loo more regularly than normal to avoid wetting myself.

When faded TV star Gloria decides to resurrect her career by taking up a place in reality TV programme ‘Reality Rehab’, she is ill-prepared for the starvation diet for both herself and her obese dog. But she is even less prepared for a houseful of misfits, including a medium, a boob-jobbed reality star, a disgraced MP, a kleptomaniac style guru, a toy boy, and, worst of all, her ex husband…

Witty, fun, and pacy, this is an uplifting read. There’s a lot of tongue-in-cheek descriptions of the reality TV, and the characters are all larger than life (as characters on these shows inevitably have to be). But there’s also a humanising element to the characterisation which, given how arrogant and self-centred every single character in this novel is, is quite an achievement. I actually found myself caring for some of the characters. One for those seeking something light and uplifting. Recommended!

*Thank you to the publisher for my free review copy. 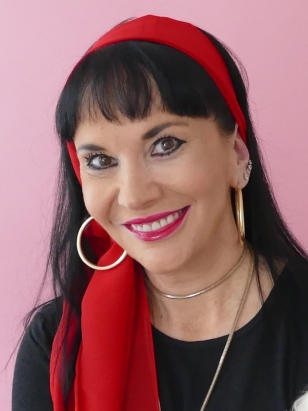